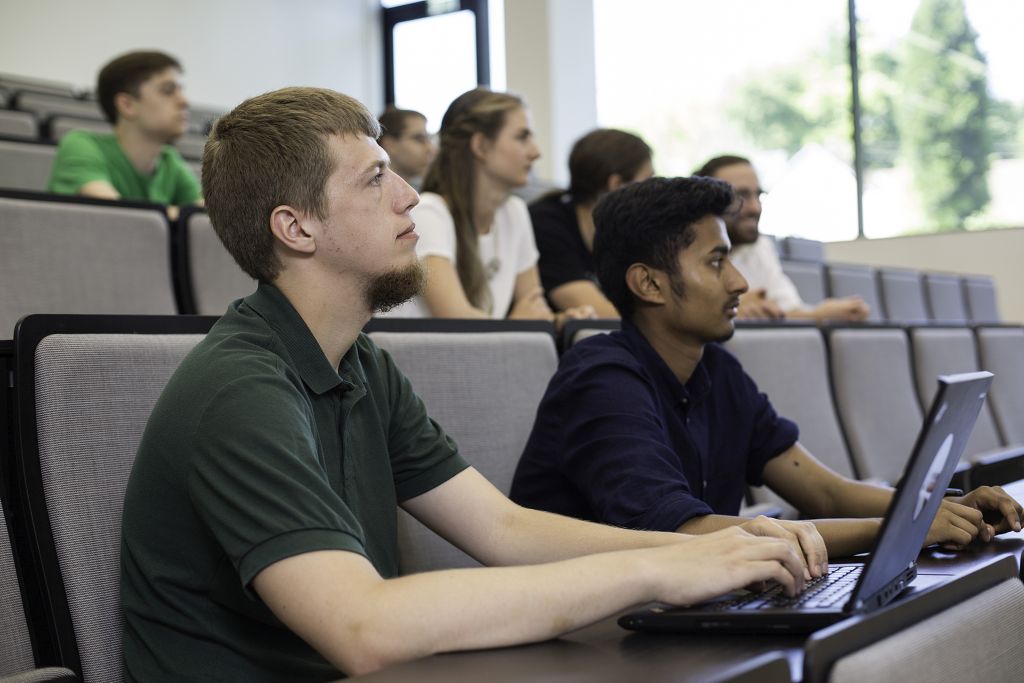 Get the latest information and details of your study!

In the Founder’s Project, you follow and realize a business idea in the area of cybersecurity and computer science, with the intent of creating a business at the end of the project.
You work as a team of 2-4 students over a total of three semesters.
During this time, you create and evolve a prototypical implementationand a business proposal.
At the end of each semester, a Jury of scientists and business experts examines your progress and decides whether you can continue the project in the next semester

Getting a good idea is hard. Your idea must be good enough to eventually sustain you and your business economically - and hopefully go beyond mere sustaining :-) Hence, you need to think about unique selling points:

These two questions will follow you throughout the project.

A great source for ideas is the lecture series “Perspectives on Cybersecurity”, which specifically focuses on open and promising issues, as well as examples from successful founders.

Another great source is your lecturers. Ask them for specific challenges, opportunities, or open questions in their field – often, researchers have some technology recently developed which one may make money from, but the researchers themselves focus on academic goals.

If you develop your idea all alone, you own the rights to it. If you adopt the idea from another researcher, they or they employer may own its rights. Consult early within your team as with potentially involved third parties as it comes to intellectual property.

Your team should consist of 2-4 students. Your team will need to encompass several qualities, both from an organizational and technical perspective. Hence, diversity is key. As a single person, you are less likely to realize all these qualities in a single individual, so you are well advised to team up with others.

Your team members should plan to finish their studies at the same time. Over time, your project will need more and more devotion from you, so try to minimize interference with studies. At the end of the project, all of you should be ready to create a business without having a conflict with getting your degree first.

Starting the Founder’s Project is similar to a thesis – you need to find a topic (that is, your idea), a team, and an academic advisor (called a mentor).

Your mentor, however, will only devote time on teams whose ideas have reached some initial level of maturity – that is, they are not dismissed with the first argument.

To express your idea, you have to draft a Very Initial Proposal. This is a two-page document consisting of two parts:

This Very Initial Proposal will be first be approved by one of the course spokespersons. Their feedback may lead you to go back to the drawing board, likely in several rounds.

Once the Very Initial Proposal is approved, the spokespersons will help you finding a mentor. (You can also use it to search for a mentor yourself). Once you are accepted by a mentor, the project will officially start.

During the project semesters, you will systematically develop your idea, both from a technological as well as from a business standpoint; your mentor will assist you with that. This typically means to implement a prototype that demonstrates the feasibility and value of your idea. This prototype may well become the base of your later business, so make sure it is developed to high standards from the very beginning.

As students, you own the rights to all your work in the prototype. The university may claim usage rights for scientific purposes. Using third-party code may require specific arrangements.

To make the Jury meeting efficient, you have to provide a business proposal that details your idea. Together with the prototype, this proposal documents your achievements in the respective semester of the founder’s project.

Your proposal should be organized along a number of questions (which actually are typical for evaluating business proposals). With each semester, you will have to answer more questions and to provide more details; your business proposal will thus grow in time.

CISPA and Saarland University provide counseling on business ideas. They will be happy to provide feedback on your proposals, especially at the late stages.

While the full list of questions may feel intimidating at first, keep in mind that at the beginning, you only need few answers – and these can still be vague. Only at the end of the third semester do things get serious, and that is when you should have all answers ready for potential investors.

Structure of the business proposal

At the end of each semester, there is a Jury session in which a Jury of scientists and business experts will evaluate your progress.

A typical Jury session format is as follows:

Both the pitch and the Q&A session are deliberately short – focus on the essentials. A typical pitch shows:

The Jury members will be provided with handouts of your presentation as well as your business proposal (see below). The Q&A session will focus on the pitch and the proposal.

This Jury session is crucial for your passing the respective project semester; if the Jury is not convinced, you will not pass.

Your Thesis and Then...

At a later stage during the founder’s project, you may actually be founding your company. This is again where the project teams at CISPA and Saarland University can help you. They will also be happy to get you in contact with investors, both nationally, and internationally; and also help with getting more team members into your company.

In the last semester of the project, you will also write your Master’s Thesis. Your thesis would typically be rooted in your joint project, and document and evaluate an individual technical aspect of your solution. Your thesis thus can also serve as reference for current and future co-workers in your company.

Each team member writes her/his thesis individually; this is thus an opportunity for each team member to highlight her/his individual contributions. As the thesis requirements are more lightweight than in other CS courses of study, you can still focus on your joint project.

After your thesis is done and your founder’s project is completed with the third semester, you will have:

At this point at the latest, your studies are over. Congratulations! However, CISPA and Saarland University will be more than happy to talk to you about further funding of your business and your entrepreneurial career.

Structure of the business proposal

State the title of your project, your names, your student IDs, and how to reach you.

Start your proposal with giving the reader your idea.

Be sure to detail some typical usage scenario, possibly using your prototype.

Now that the idea is set, tell the reader about yourselves, and why you are the ones to do it.

Let the reader know about the market – and how you want to make money.

Be sure to detail the difference your service makes – in particular compared to the state of practice, or the state of the art.

In the first semester, only a rough estimate is required here; in later semesters, you will have to refine these estimates, detailing how they came to be.

Do I have to have a firm business idea already at the beginning of my studies?

No. Of course it is an advantage if you already know what area you want to focus on, but you don't need to have an exact idea at the beginning. In the first semester, various founders present their business ideas and their way to founding a company, and you can get inspired there. In the second semester, the start-up project begins and here you should already have chosen a group and your start-up idea.

How large should the groups be?

It is foreseen that the groups have a size from 2 to 4 people, however, in justified exceptional cases the group size may vary.
Please contact the program chair Andreas Zeller to clarify the individual situation.

When will the company be founded?

The company is established only after successful completion of the studies. In the study itself you will work towards this foundation and you will be supported in the process and learn what you have to pay attention to.

Where can I find the founders project in the LSF?

These courses are not displayed in the LSF, but are supervised by Prof. Dr. Zeller. Contact him early to learn more about this event.

Where can I find the business startup project in the LSF?

This event is representative for a freely selectable module from the field of business. Various modules can be taken here, which must fulfill certain requirements.
For inquiries whether a module meets the requirements, please contact Prof. Dr. Zeller.

Can I apply to the program and get accepted before I got my bachelor certificate?

Yes, if you do have a letter from your university confirming that you passed your exams and that your BSc will be awarded before the lectures start (i.e., mid October).

What are the required degrees and/or skills?

Our MSc in Entrepreneurial Cybersecurity is a very competitive program that requires strong technical skills in Cybersecurity and Computer Science. If you do not hold a strong degree in these fields and still want to apply, be sure to demonstrate your capabilities appropriately. On top, activities that indicate entrepreneurial skills are very welcome.

Help us by submitting your anonymous usage data.